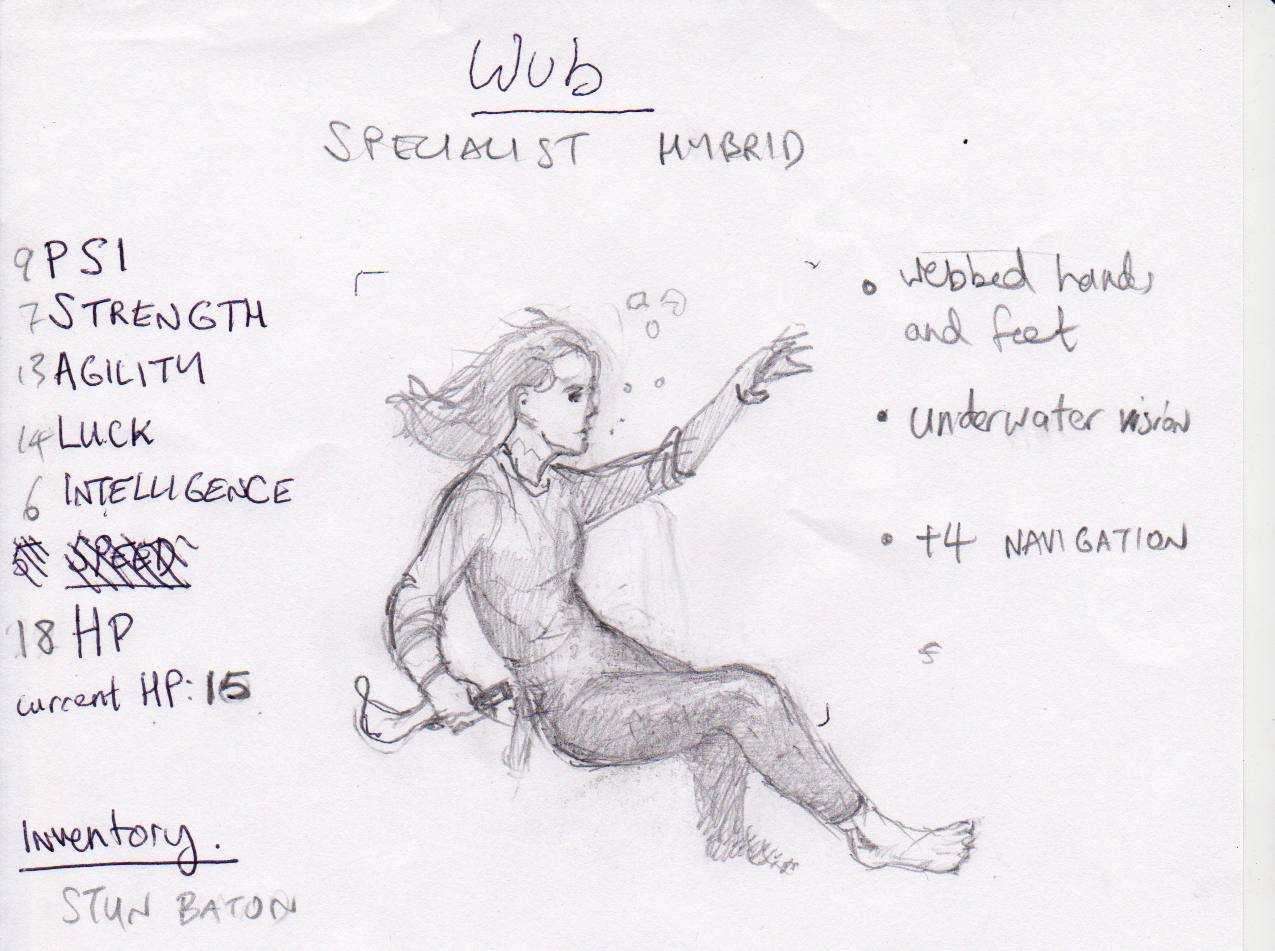 Hi folks, today I went to a fantastic workshop. Brenda gave a presentation that was full of solid advice and guidelines, which inspired the odd lot of us to create weird fun games. Brenda also performed some kind of miracle – she managed to focus and push a bunch of creative people into hyper-productive versions of ourselves for a whole day. People introduced themselves and later groups formed around shared interests – though the games that were made veared and evolved quickly from their starting points. The group I was with had a great mix of experience and backgrounds and I feel particularly lucky for the enthusiasm each individual brought to the tabletop. Haha. Sorry. (haha)

The RPG which my team was working on ended up being this rich world with all sorts of inspirations that felt at times like Bioshock, at times like some Lovecraftian horror, at times some kind of Red Faction rebellion thing. It was a load of fun! The game didn’t have a name but I’ll refer to it as Underpressure.

The game is set in a biosphere city in the deep ocean. There are two teirs of inhabitants – the “Elite” humans, who in my mind are like High Elves, they are well educated, well heeled bunch, with control over the rest of the society and divvy up the resources. Much like the pigs of animal farm. Then there’s the “Hybrid” humans who are genetically enhanced humans, often with cyborg augmentations, who harvest resources and perform all of the labour required to keep a civilization ticking over. The Hybrids also make up the police force and standing army, apart from the respective higher-ups like the Cheif of Police and the General and their subordonates who are Elites. and the standing army. It’s a big, high tech place.

Then there are the stories. Myths or legends of an ancient humanoid species, much taller than the average human, who dwell in the mysterious ocean depths, in the deepest, darkest places. Much of the deep sea floor is still unexplored by the humans, aparently. This race of humanoids are called the Lumarians, paying homage to the tales of the Pre-atlantian civilization. This brings about another feature of the game – psychic ability.

The Lumanarians are a powerful psychic race, and the Elite humans also have some notable individuals, though this power is mostly kept secret to the populace of Underpressure. See, I named the city after the name of the game, which I just named. I hope the team like it, otherwise I’ll have to edit this post! Anyway, some Hybrid humans also have psychic abilities and potential, though noone would be given training in it’s use.

So, with this setting, we started playing immediately. Brenda showed her experience here as she took aside all the GM’s and must have told them something magical – the game that ensued was one of the most fun RPG sessions I’ve had! Though I largely suspect that to be the creative genius that is Maura, our Game Master and Chief Imaginatrix. She’s awesome, go follow her on twitter now! @splinister

Together we rolled characters and got to it. I rolled high Agility, lowish everything else, so I made a Specialist Engineer – someone who would go into high-risk environments to do repair work. Mike rolled up a Priest / Miner who’s name escapes me – the priest had lost his faith and was incredibly strong. George rolled up a Smuggler character called Brian who claims to work in “Recycling”. Ha. We started immediately in a combat scenario and didn’t know what to do, we asked questions and got answers – Maura was making it up on the fly and it was working. We asked if we could do something. Maura asked us what we wanted to do. It was so clear in my mind, but having played other RPG’s I’m used to there being some system that restricts us. I simply said, “I want to do [x] and [y]” to which Maura would dissect and say, “roll a dice against this Stat to do [x]” – I didn’t have time for [y], because Brian was also doing something and Maura had to get to everyone acting simulaneously. So many systems make a lot of sense to me now. And I’m also thinking about how I can make a new one!