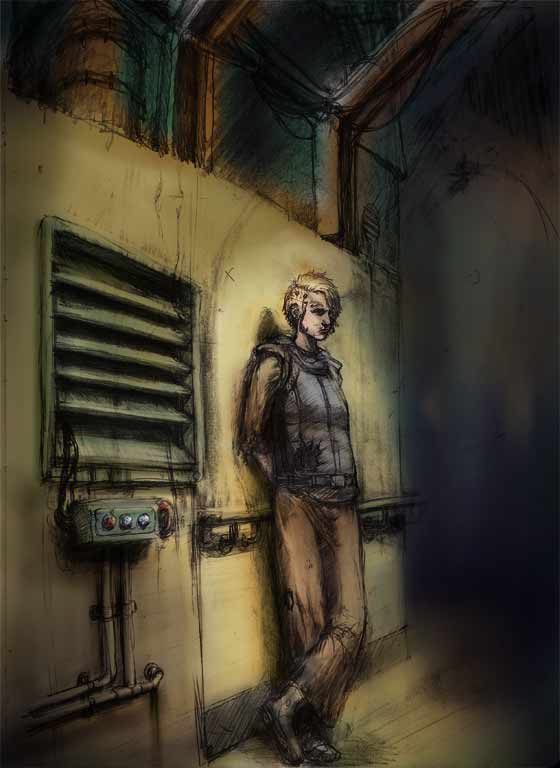 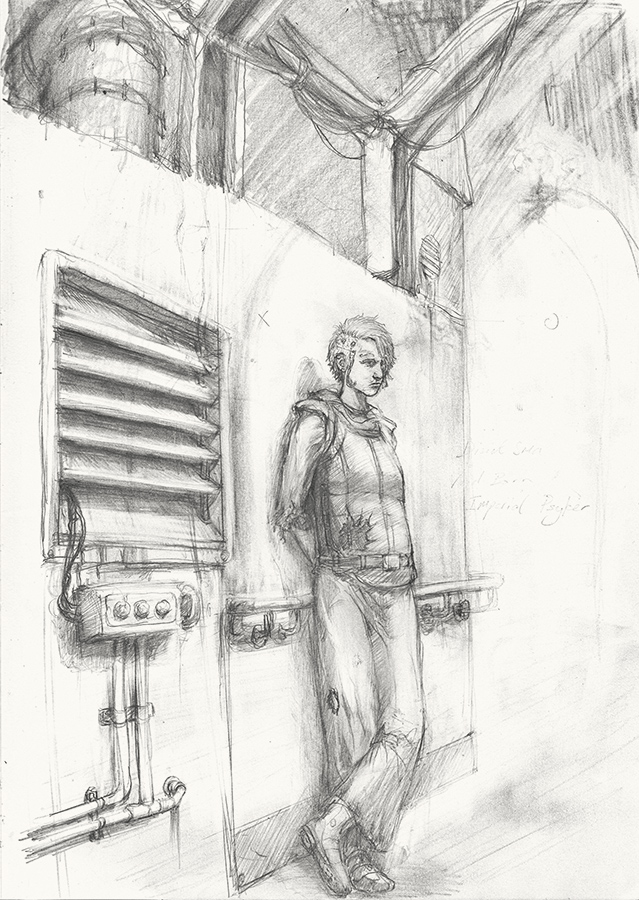 Here is a sketch of a character created by a friend during a session of the tabletop role-playing game Dark Heresy.  I’ve also made a very rough digital painting by throwing together some arbitrarily chosen colours. It’s literally (and obviously) just using the paintbrush tool in another layer.

Diziette wears a quilted vest armor over robes, and has taken some battle damage over the course of the game.  She is in no hurry to repair this or acquire new armour, though would really like a nice hat.

Diziette is a socially awkward, impulsive, flippant and scarily powerful voidborn psyker.  Her tendancy to be misunderstood often leads to some incredible, dramaticly over-blown situations as the people around her deal with the consequences. Diziette generously applies of her Warp-powered Psyker talents.  On such occasions the random effects that arise from interfering with Warp energies tend to manifest themselves in weird, wonderful and myriad horrible ways.  Needless to say, Diziette makes a great addition to any team.

Diziette has grown up with her psyker talents on a Warp-travelling space hulk.  Her familiarity with the Warp has left her somewhat desensitized to it’s many inherant horrors.  Her perspective thus tends to be rather unfathomable by us regular humble humans. For example, merely upon seeing a creature of the warp with their own eyes, the average sane person would go through a widely recognised sequence of mental states.  First they would have their psyche stretched to it’s limits. On the cusp of snapping, the straining psyche is strummed like a taught elastic band to generate the torturous mental equivilant of an amusing sound, much to the joy of whatever hideous and horrifying beast they have laid eyes on.  Then, quickly bored at this play, the inflicted psyche is promptly snapped – stunned into a state of overwhelming fear, which is simultaneously chorused by a brief sensation of laughter.  Naturally, a lifetime of skittish temperment follows, with a generous helping of night terrors. Diziette, however, would greet the appearance of a warp creature as one would a mewling kitten, somewhat cute and cuddly.  She’d probably say “Aww!” and find a toy for it to play with. To anyone else who’s laid eye’s on a warp creature, the prospect of mewling kittens would be deeply unnerving, if not all too terrifying.

Dark Heresy by Fantasy Flight Games is set in The Games Workshop’s Warhammer 40K universe. It’s grim, dark, and a nice bit of fun to play with friends if rolling dice is your thing and you’ve some time to kill, and indeed burn for good measure.